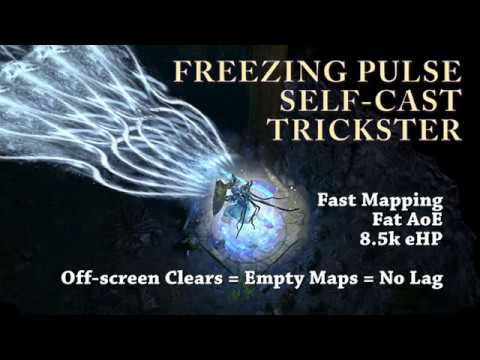 UPDATE FOR 3.11:
Seems like this build was left pretty much untouched based on the patch notes that were just released. Freezing Pulse was actually given a small buff, increasing the effectiveness of added damage from 150% to 200%. Depending on how much added flat damage to spells you have on your gear, this could either be a small buff or just completely unnoticeable at all.

The updated Brinerot Flag seems like a really good shield to use in this build to integrate War Cries (probably Enduring Cry) as well. It would allow us to swap out Arcane Surge for Added Cold Damage in our 6L which could potentially lead to much more damage, considering Freezing Pulse was buffed for increased damage effectiveness. I’ll still have to test it, but if it does end up being stronger, I will update the PoB link once PoB gets updated with the new Uniques etc.

Based on PoB, the Crit Multi nerfs only lead to a 1-2% drop in dps for the build.

Last build for the league! This build SHOULD carry over to 3.11, but I will drop an update here if anything changes later on when the patch notes are released. This is a viable league starter since we are using only 2 Unique items, Cloak of Defiance and First Snow Cobalt Jewels.

I never really liked playing self-casters as they always felt very clunky to me. However, this is a really solid build that does a crazy amount of single target and AoE damage while mapping, but falls off a bit during the Sirus fight with no mob spawns to recharge your flasks (all other bosses are fine).

This is also one of the more tanky builds I’ve done.
We are running with 4.5k HP + 2k ES + 2k Mana, giving us a total health pool of ~8.5k with Mind Over Matter and permanent Fortify.

With all flasks and buffs up while mapping, we are able to deal out ~15mil dps, which is more than enough to clear all end-game content.